The Cuisine of Italy - Ancona 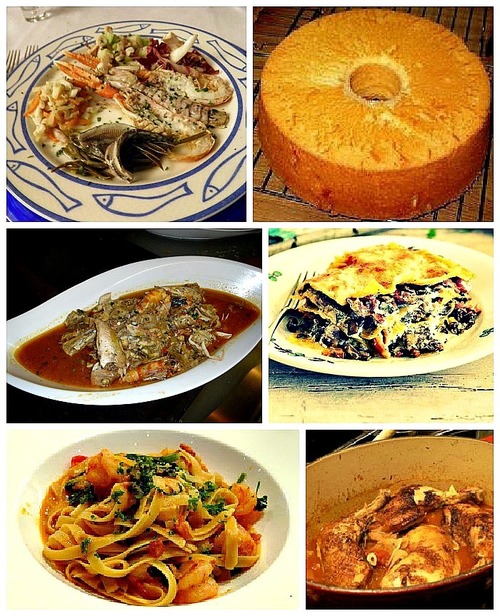 Ancona is Italy’s largest ferry port on the mid-Adriatic

The Marche region (also known as the Marches in English) forms the eastern seaboard of central Italy with the regions of Emilia-Romagna to the north and Abruzzo to the south.

Ancona is on the top of a cliff and has a city center rich in history, monuments and well preserved semi-urban parks.

lts style of cooking is defined by fish and seafood along the coast, and vegetables, chicken, rabbit, snails, and truffles and other wild fungi in the hills and mountains. The coastal brodetto, or seafood stew, is seasoned with saffron and traditionally made with thirteen kinds of fish.

Ancona is one of the biggest stockfish (dried salt cod) importers and Stoccafisso all’ Anconetana has a special place in the heart of Ancona people and in the history and tradition of this town.

Creamy sauces made from chicken giblets are used liberally in Marche cooking. Pork recipes rely on generous chunks instead of the traditional thin prosciutto style servings. Since pork is so readily available, there are many types of sausages made in the Marche region. A hearty favorite local smoked sausage is ciauscolo, made with half pork, half pork fat and well seasoned with salt, pepper, orange peel and fennel seed. Olives grow well in this region and are served both on their own or stuffed with savory meat fillings. Grapes, grains, mushrooms and a wide variety of vegetables are found throughout the region.

Cheese-wise, Marche holds its own in the steep competition for great Italian dairy products. Casciotta d’Urbino is a sheep and cow milk cheese, hand-pressed into rounds that are then salted and cured in a moist environment, producing a velvety texture. Ambra di Talamello is made from goat or sheep or cow’s milk and is cured in a pit lined with straw, resulting in an earthy flavor. Cacio La Forma di Limone is a sheep’s milk cheese made with lemons, then formed into small balls (that look a bit like lemons). It is rubbed with a salt and lemon mixture and has a light lemon tang. Some excellent Pecorino cheeses can be found in the region as well.

Pasta in the Marche region is rich with eggs, with wide noodles being the most popular, such as, lasagna and pappardelle. The region’s signature dish, a pasta casserole with meat sauce, showcases flat pastas and savory meats. Other pastas like spaghetti alla chitarra, spaghettini, tagliatelle and maccheroncini have also found their way into Marche dishes.

Coniglio in Porchetta style (roasted in the style of porchetta) with fennel and salt.

Frustingolo, a dense fruit cake made with nuts and dried figs.

Read about the Jewish influence on the Ancona Food