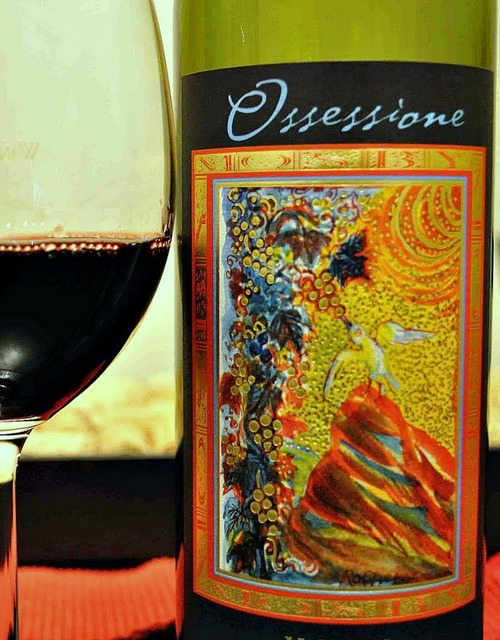 Mosby Winery in Buellton, CA makes exclusively Italian varietals in the classic styles of their origins.

Ossessione, that has an incredibly artistic and beautiful label made by the artist named Robert Scherer, is a true Italian import with the grapes coming from Marche, Italy near the Adriatic Sea.

True to its heritage, Ossessione has brilliant ruby color and an intoxicating nose with perfume-like notes of woodsy sandalwood, brown spice and maple. Flavors, of dried red currant and spice finish with medium tannins and a hint of vanilla. The wine is ready to drink now, and would paor very well with roasted meat dishes or a selection of Italian cured meats served in the antipasti style. 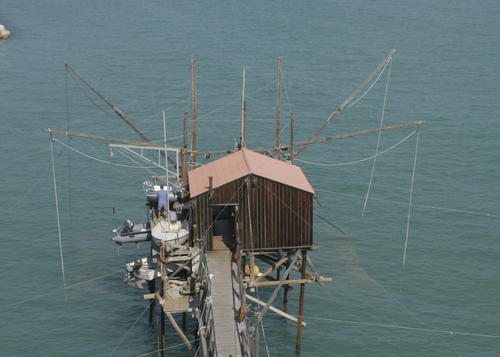 Old fashioned fishing machines surround Termoli’s old town, and although the contraptions have lost their economic importance they are still in use.

For some reason, I have always associated the characteristic Trabucchi – or trabocchi as it is also spelled – with the Gargano peninsula. These fragile wooden constructions that float above the water like a daddy longlegs caught in a web of weights, pulleys, pine sticks, rods and fishing nets, ready to seize any fish swimming past can be seen on the coats between Vieste and Peschici, but the ingenious fishing machines are also used further north. For instance, trabucchi surround Termoli’s old town, and although the contraptions have lost their economic importance they are still in use.

Connoisseurs may even spot a difference between Puglian versions and trabucchi in Abruzzo and Molise. On Gargano, the trabucchi fishing machines are placed on a rock overhanging the sea, fishermen in Abruzzo and Molise go farther out from the shore when they construct their trabucchi platforms, which can be accessed through a long jetty. The sea depth has to exceed 5 metres for the trabucchi to work and it should be placed correctly in relation to currents, seabed conditions, et cetera. 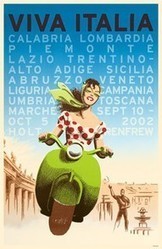