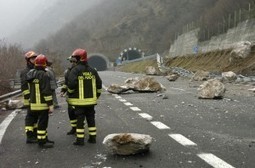 Mouseover the image of Italy to reveal its story. 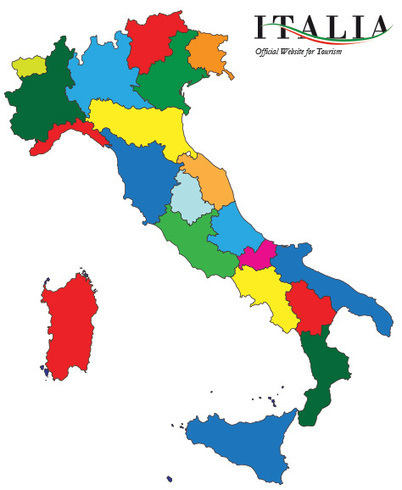 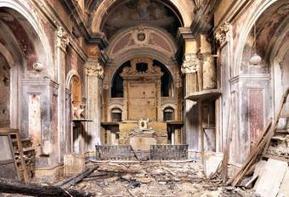 Italian newspaper ‘Corriere della Sera’ ran a report revealing that approximately 200 of Naples’ churches are either closed or abandoned.

The report suggests that the churches are in a state of neglect because of mismanagement by the authorities including national and local government, the Church and the Ministry of Culture. The report asserts that there are cases where planned restoration works have not been carried out. Among the churches the newspaper lists as being in a state of disrepair are the garbage-littered Sant’Antonio alla Vicaria and the S. Maria Vertecoeli that has a damaged roof open to the elements.

The damning report comes after a petition circulated in late 2012 calling for Naples to be stripped of the UNESCO World Heritage Site status it gained 17 years ago. Signed by leading intellectuals and 16 civic committees, the petition was accompanied by a photographic dossier documenting neglected buildings in the city.

On the Road in Italy: Agriturismo Experience in the Italian Countryside 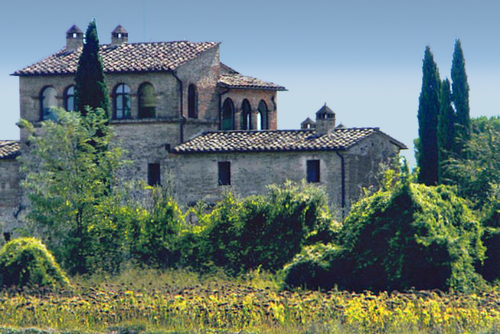 Approaching our 40th wedding anniversary, I knew that my wife, Jane, wanted to go somewhere special. What I found was Al Petrogallo, an Italian farmhouse built in 1571 - exactly 400 years before we married in 1971. She was impressed.

Al Petrogallo is in Umbria, near the Tuscan border in central Italy. I discovered it on agriturismo.it, a website about Italian country homes, and began corresponding by email with Antonella, daughter of the owner. Antonella said we would enjoy walking along the Tiber River and visiting nearby Umbertide. She recommended exploring the cities of Gubbio, Assisi and Perugia as well.

In early September 2011, we flew to Rome and then boarded three consecutive trains to Umbertide, where Antonella met us. The farm itself is a collection of three buildings with eight bedrooms, set amid wheat fields and sunflowers. Our apartment was roomy (about 900 square feet) and modern, yet lovingly restored with brick, tile and timber.

Poolside, we met guests from Germany, Belgium, Poland and the Netherlands. We enjoyed evenings together sampling local wine and cheese. We also met Antonella’s sister, mother and father. It was her father, Mario, who had renovated the old home.

With the farm as our base, we began exploring a region steeped in history. As planned, we walked on the dirt path along the Tiber River to Umbertide, where we wandered through the colorful farmers market. (among our favorite discoveries: porchetta, roasted pork on a fresh, hard-crusted roll.)

One day Antonella’s brother-in-law, Andre, kindly drove us to Gubbio, where he worked. In the middle of a conversation about the town’s Roman influences and medieval architecture, we rounded a curve and came upon both—a Roman theater and, behind it, the walled city, whose narrow streets and stone buildings gave us a glimpse of the Middle Ages.

Then it was on to Perugia and Assisi. The former features an ancient underground city (reached by modern-day escalators). Tunnel-like walkways take visitors back to the times of the Etruscans, who predated the Romans.

Assisi, of course, is the birthplace of St. Francis. As we made our way along hilly streets there lined with quaint shops, we reached the basilica that bears his name - and found ourselves watching a wedding party. The link to our marriage four decades earlier was perfect.

The week went all too fast. We went on to Rome, but our best memories return to the farmhouse along the Tiber. 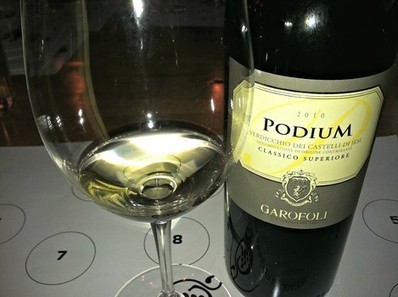 With the first stirrings of summer heat, the crisp, citrusy allure of white wine beckons. Italian whites differ from California whites in that they are often a blend of citrus, almond, herbal, and mineral, less big fruit than a bewitching melange, mostly fermented in stainless steel instead of a toasted oak barrel, an interesting yet easy-drinking wine to ponder the questions of the ages.

Verdicchio is a characterful white wine that comes from the Le Marche region of Central Italy, just east of Tuscany on the coast. It’s a rugged region, sparsely populated, with a history of two wine grape varietals, Verdicchio for white and Montepulciano for red. Verdicchio comes in two distinct incarnations, the Verdicchio dei Castelli di Jesi (the biggest production, softer, rounder, and most easily found in this country) and the Verdicchio di Matelica (which is a sharper, more floral version). The Verdicchio del Castelli di Jesi springs from limestone soils, channeling its minerality into the body of the wine. Verdicchio means “little green one” in Italian, and its straw color with green tinges reflect that. A flavor profile of fresh apples, lemon (fruit, peel, and flowers), herbaceous notes, wet stone, and a slightly bitter toasted almond finish form the base for the wine. Crisp acidity, with medium alcohol, it is food-friendly (especially to fish) and an excellent aperitif. Once disparaged as a simple quaffing wine, Verdicchio’s quality has been improved in recent years by local producers, especially Garofali, who has mastered the incarnation of this grape.

At a recent Le Marche educational dinner seminar, conducted by the North American Sommelier Association, four Verdicchios were explored. The 2010 Bucci Verdicchio dei Castelli di Jesi Classico was a pleasant aperitif, more golden delicious apple and almonds, with the vanilla touch of a brief time aged in oak. The 2011 Garofoli “Macrina” Verdicchio Classico Superiore was aromatic, elegant, yet crisp in its expression. Grapefruit, lemon, and lime notes frame the yellow plum, ripe apples, peaches, and mango flavors, with a long finish of slightly bitter hazelnut skin. The 2007 Villa Bucci Verdicchio dei Castelli di Jesi Classico Riserva was rounder, more elegant, full bodied and well balanced, with aromas and flavors of apricot compote, spice, hazelnut, honey, and flint. The oak and bottle aging contributed to the more savory character of the wine, with more spice, nuts, herbs, and mineral notes present over the fruit and floral of a younger wine. Finally, the 2010 Garofali Podium Verdicchio Classico Superiore offered up intense ripe apricot fruit, citrus, almond, a touch of honey, mineral notes, a hint of green hazelnut, no oak, and an intriguing salinity. This is not a simple wine, dry and crisp when young, but worthy of aging (it develops a deep golden hue and a ripe apricot flavor tinged with a burnt sugar note reminiscent of creme brulée), it has earned lots of notice from wine critics. and the influential Italian wine guide Gambero Rosso has bestowed the Tres Bicchieri (three glass) award to this wine.

Try Verdicchio for a change of pace, a savory, crisp white wine that complements seafood and fish, but stands on its own as a zesty, citrusy, almond-tinged aperitif, constantly refreshing the palate, and begging you to empty the glass. 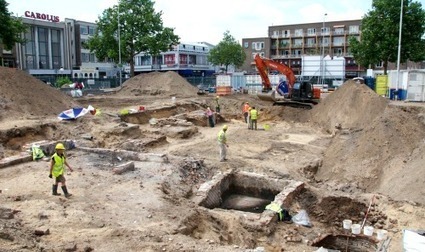 Try a Colomba cake while in Rome for Easter! Our tips for the best artisanal ones 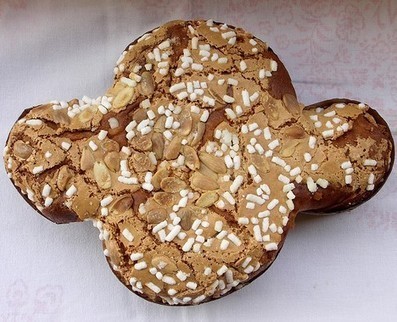 “The cake that tastes like spring.” This is how Colomba (dove) was presented to Italians in 1930, when one of the biggest panettone makers – Motta – decided to use the same machineries, techniques and more or less the same ingredients to make another cake, the dove-shaped colomba (peace symbol) for Easter, the most important Catholic feast.

You can find many different industrial colombe for as little as 4 euros in supermarkets, but if you want something better for this relatively recent traditional Italian Easter cake, here are some tips.

These are our preferred artisanal colombe in Rome. 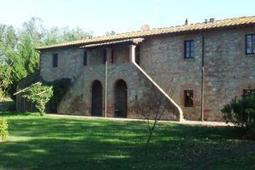 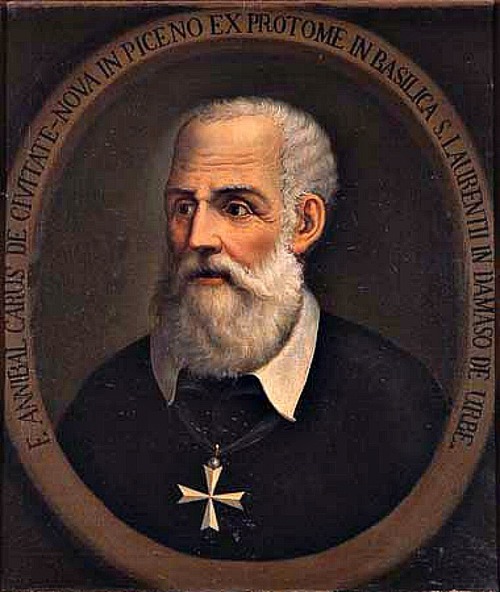 Born in Civitanova Marche in Le Marche Region of Italy, Caro became tutor to the wealthy family of Lodovico Gaddi in Florence, and then secretary to Lodovico’s brother Giovanni. At Gaddi’s death, he entered the service of the Farnese family, and became confidential secretary to Pier Luigi Farnese, Duke of Parma, and to his sons, Duke Ottavio and Cardinals Ranuccio and Alexander.

Caro’s most important work were his translations. The Translation of the Aeneid was much admired by contemporaries, and still is read with pleasure by the lovers of the Italian language. Another translation which remained the standard one for several centuries is that of Daphnis and Chloe, the novel by Longus. He is also the author of poems, sonnets, and a comedy called Gli Straccioni. His work additionally includes two clever jeux d’esprit: La Fichelde, in praise of figs, and a eulogy of the big nose of Leoni Ancona, a local figure. His poetry is noted for the freedom and grace of its versification, so that many claim that he brought verso sciolto to its highest form in Italy. Letters he wrote, both in his own name and on behalf of the Cardinals Farnese, are considered remarkable for both the baseness they display and for their euphemistic polish and elegance.

Caro’s fame was diminished because of the virulence with which he attacked Lodovico Castelvetro in one of his canzoni, and by his meanness for denouncing him to the Church for translating some of the writings of Philipp Melanchthon, an associate of Martin Luther.

In 1555 Caro was installed as a “knight of grace” (a member not taking religious vows) of the Order of Malta by Cardinal Alessandro Farnese.

Caro died in Frascati in 1566 and was buried in the Church of San Lorenzo in Damaso in Rome. His prose includes translations of Aristotle, Cyprian, and Gregory Nazianzen.