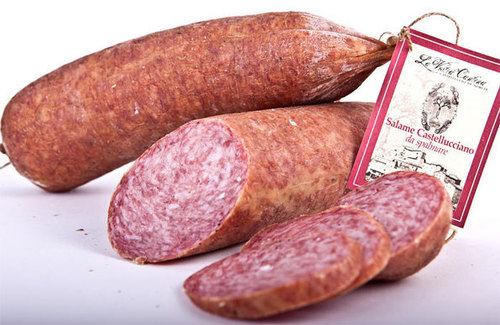 […] Marche a region often overlooked by tourists and Italians alike– is in the middle of Italy, bound by the Adriatic sea and the Sibillini mountains. Apart from its photographic vantage points, it is more importantly, the home region of ciauscolo. More specifically, the sausage is produced in the provinces of Macerata, Fermo and Ascoli Piceno– which have subsequently held PGI (Protected Geographical Indication) status since 2009.

Made from cuts of pork shoulder and belly, lonza (pork sirloin), prosciutto, and some extra fat, ciauscolo is seasoned simply with black pepper, salt, garlic, and sometimes vincotto (a sweet cooked wine). The finely minced mix is then cased, and left to dry for one day. The sausages are then cold-smoked over juniper branches for another two days, and finally left to age for two weeks

With such a brief age time, the result is a softer, spreadable sausage that is habitually had over bread. A lightly seasoned and slightly smoked, almost-raw spread, its texture is more akin to a paté–thus making ciauscolo distinct from the well-known, dryer salumis synonymous with Italian fare. However, for those who aren’t so keen on gnawing raw, you can also get ciauscolo that has been seasoned for a few weeks longer, and find yourself the more familiar, dryer, sausage texture. Both are worthy additions to your charc’t board; but the former, more so.

I would suggest a wine, but, why not follow the juniper theme and bring out a decent gin? It’s 2013! Let’s get modern!