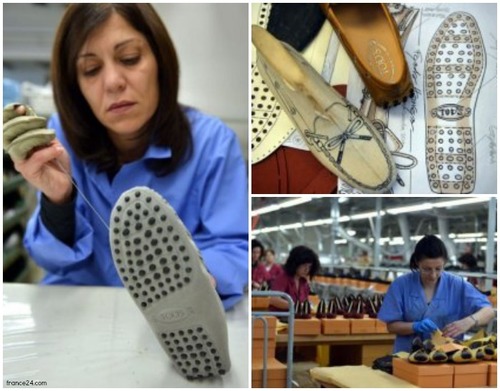 Custom-made shoe moulds hanging in a sun-filled workshop are the secret behind the success of luxury Italian shoemaker Tod’s, which is flourishing despite a recession-hit economy.

Harrison Ford, Princess Caroline of Monaco and Brad Pitt — as well as countless of the newly rich in places like Brazil and China — are among the wealthy foreign clients that are boosting sales.

The craftsmanship and management may still be homegrown but the company — like many in the Italian luxury sector — has been forced to give up on its domestic market, at least for now.

Sales in Italy last year fell by 26.7 percent last year and went up by 55 percent in China.

Tod’s managed to ring in a net profit of 145.5 million euros ($188.6 million) last year — a 7.4-percent increase on 2011 — despite the context of austerity and recession at home, where the economy has now been shrinking for two years.