Getting Dirty in the Frasassi Caves, Marche 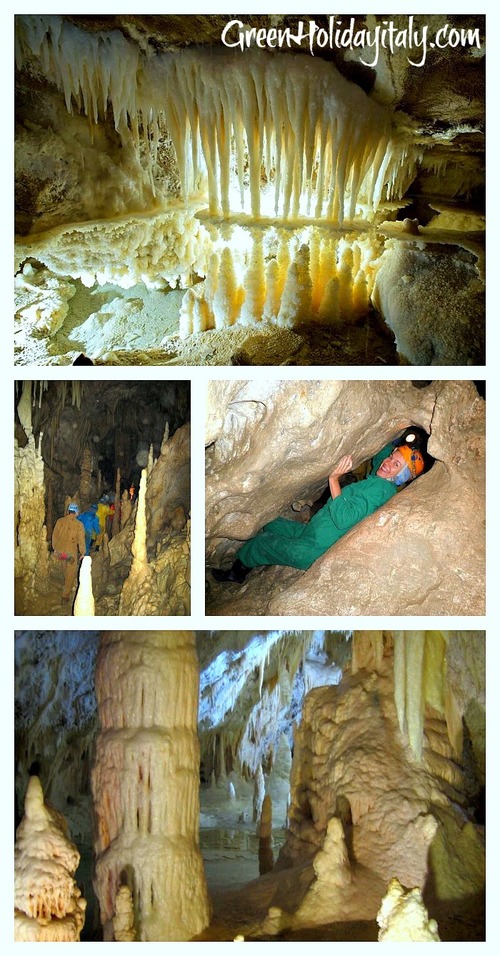 300,000 of tourists visit the Frasassi caves (Grotte di Frasassi) every year. But even there I managed to get off the beaten track and have a great adventure!

The blue and red speleo adventure routes in the Frasassi caves are for the more curious. The blue route (percorso blu) takes 2 hours to complete and a group of 25-30 people is admitted a few times a day. The red route (percorso rosso) is for 3 hours and the groups are smaller – 10-13 people. Now we are talking!

We started by putting on brightly coloured overalls, rubber boots, disposable hair caps and helmets with lights. The long man-made tunnel brought us to the first cave chamber, Abisso Ancona, which left us speechless: 200 metres high, 180 metres long and 120 metres wide. This chamber would easily fit in the Milan Cathedral. We continued following the tourists’ path on nice wooden bridges, with our jaws dropped at the grandeur and beauty of the stalactites and stalagmites. It was crowded enough and other visitors were staring with curiosity at our outfits. Don’t know about the rest of the group, but I felt like a speleologists, who was about to enter the mysterious world of one of the largest caves in Europe. And so we did, stepping off the wooden bridge through a little gate, followed by the looks of the less adventurous tourists we began our speleo-adventure.

The description on the Frasassi website warned: prepare to get dirty! And muddy it was! […]