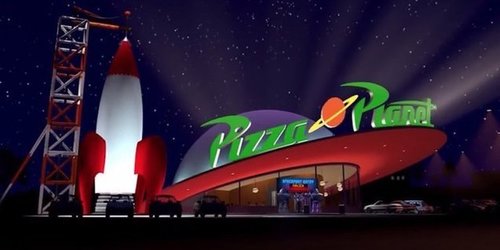 Disneyland is opening a new Pizza Planet restaurant inspired by “Toy Story."The space-themed arcade restaurant will reportedly be brought to life this April.Details about what the restaurant will entail are limited as the park is being pretty secretive when it comes to the project.Great news for kids of all ages: Disneyland is opening a new Toy Stor y-themed restaurant, and pizza will definitely be on the menu.Remember that scene in the Pixar classic where Buzz Lightyear and Woody encounter the aliens (aka Little Green Men) who worship "the claw”? (Her e's a reminder.) Well, according to WDW News Today, that space-themed arcade restaurant will be brought to life in the California theme park’s Tomorrowland this April.The restaurant’s full name will be Alien’s Pizza Planet—A Better Place, referring to the Little Green Men’s mantra that they go to a better place when they’re captured by the claw machine. And while the park itself is being pretty hush-hush about the new eatery, we’re willing to bet that a similar arcade game will be featured in the restaurant’s decor.