Flavors of Friuli: A Culinary Journey through Northeastern Italy by Elisabeth Antoine Crawford 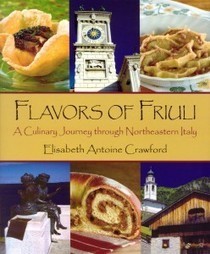 What inspired you to write your book?

I had been traveling to Italy for over a decade, and as I was also passionate about cooking, I became particularly interested in regional cuisine. While on a business trip to Friuli-Venezia Giulia, I fell in love with two of the local specialties—frico and cjalsons. From there, the idea just grew as I discovered the uniqueness of Friulian food. Since there were no books on Friuli or Friulian cuisine at the time (at least none that were still in print), I felt that there was a niche to be filled.

Plump gnocchi stuffed with juicy plums and then tossed in browned butter, sugar, and cinnamon? How about pasta filled with dried figs and ricotta, or even chocolate and walnuts? Yes, Italian food is more than just spaghetti, and tiny Friuli–Venezia Giulia—hidden from tourist mobs in Italy’s northeast corner—boasts one of the country’s most distinctive regional cuisines. With influences from Austria, Hungary, and Slovenia, the Friulian people cleverly merge humble, local ingredients with exotic spices from foreign lands, resulting in a cuisine that, while often surprising in its blend of sweet and savory flavors, never ceases to delight the palate. In Flavors of Friuli, Elisabeth Antoine Crawford has compiled eighty of Friuli’s traditional recipes—including frico (Montasio cheese crisps) and gubana (dried fruit and nut spiral cake)—and presents them with clear instructions that any home cook can easily follow.