What language is spoken in Italy? Are you sure it is Italian? Pt. 1 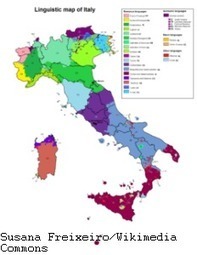 The dialects which are still in use are: the Franco-Provençal, located in the North-West sector of Italy, mainly in Valle d’Aosta, Piemont and in the French Valleys. The Occitan is spoken in the Western part of Piemont and in the homonym French region. The Tyrolean is a Germanic language, spoken in Trentino-Alto-Adige as well known as Südtirol. The Ladin-Friuli and the Slovenian, are mainly diffused on the East side of the boot, to the borders with Slovenia and they show a huge number of influences from Slavic languages. The Venetian language, which is an “autonom” linguistic group, is well known for its beautiful sounds, complexity and its use: here young people still use it daily. It is spoken in the whole region of Veneto and in Trieste’s area. The Galloitalic regroups the area of Emilia, Romagna, Liguria and Lombardy. Those are the areas which have got more influence from the southern Celtic and barbarian populations.

The Tuscan, is known for being the “Italian language’s father”, in fact, starting from the Tuscan Vulgar dialect, Dante Alighieri gave life to his Divine Comedy, which has been adopted as the first epic poem wrote in Italian. The Median language, for instance is regrouping all the dialects spoken in the center of the peninsula from the coasts of Rome on the Tirrenian side to the Adriatic bay.

Next article: languages of South Italy and their history!