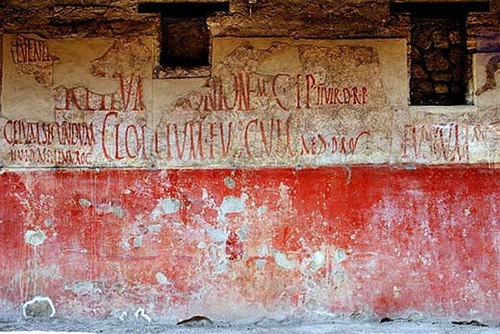 A study conducted on the graffiti found on Pompeii’s walls reveals it was an early form of political campaigning and social networking.

The Ancient Roman city was covered in ash when Mount Vesuvius erupted in 79AD. Much of the graffiti on the ancient city’s walls is preserved in remarkable detail.

Research conducted by archaeologist Eeva-Maria Viitanen, a post-doctoral researcher at Finland’s University of Helsinki, shows that Pompeii homeowners had some control over who scrawled on the walls of their houses. Speaking at the annual meeting of the Archaeological Institute of America in Seattle, she explained that graffiti was scratched into the stucco walls, written with charcoal, or in many cases even created by professional painters hired for political campaigns.

Viitanen is a project manager and co-ordinator for the Pompeii Project of the University of Helsinki. She examined more than 1,000 political messages found on walls in three areas of Pompeii.

She discovered that in 40% of cases, political adverts were placed on the walls of the homes belonging to the wealthy, which is notable given their homes were outnumbered by shops, bars and the dwellings inhabited by the city’s poor. Viitanen hazarded a guess why, saying: “Bars were probably more populated, but could their customers read and would they vote?”

Viitanen suggested the rich Ancient Romans were happy to allow their lavish homes to be used as prime advertising space for political slogans aimed at drumming up votes for political candidates during electoral campaigns. Such permission may have even signalled an endorsement. Viitanen told the journal ‘LiveScience’: “The facades of the private houses and even the street walks in front of them were controlled and maintained by the owner of the house, and in that respect, the idea that the wall space could be appropriated by anyone who wanted to do it seems unlikely.”

The archaeologist found that the majority of political ads are in areas that were likely to get most traffic, and consequently guaranteed exposure and targeted an audience. She told ‘Live Science’ that the slogans were simple, perhaps saying that a named candidate was “worthy of public office” or “a good man”. However, in a nod to early spin and the bella figura, she revealed that one candidate boasted of his ability to bake bread.

The political slogans are not the only type of graffiti found in Pompeii. The Ancient Roman citizens scribbled thousands of messages on the city’s walls, including literary quotes and greetings to friends, suggesting there was a thriving form of social networking centuries before Facebook was invented.