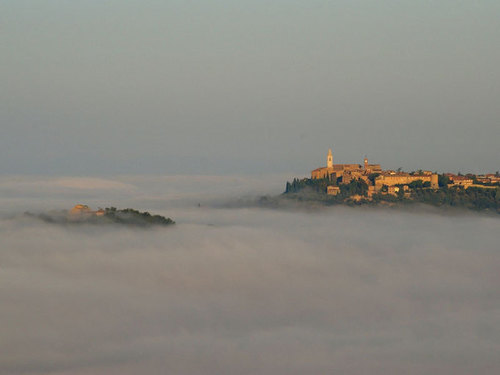 This pleasant city, situated in Val D’Orcia’s heart (near Siena, in Tuscany), is considered to be the incarnation of a Renaissance utopia and an ideal city. Having obtained recognition as a UNESCO World Heritage Site in 1996, today it continues to show off to the world its refined and sophisticated Renaissance urban plan: its spaces and perspective onto its 15th-Century piazzas and palazzi are organized according to the era’s ideals of rationality and humanism. Pienza was realized by the request of Pope Pius II (Enea Silvio Piccolomini), from whom the city’s name derives. Upon being named Pope in 1458, Pius began to dream up a new design for his native town, and entrusted his dream with Bernardo di Matteo Gambardelli, an apprentice of the famous architect and scientist Leon Battista Alberti. Construction on the city (between 1458 and 1462), comprised the ancient borgo of Corsignano; legend has it that a soldier from Sillano, called Corsinio, founded the original town.

The geometric perspective, the impressive volumes of the Cathedral and of Palazzo Piccolomini, and the utilization of space in the Medieval borgo’s center represent a remarkable testimony to the architectonic genius of the epoch.

The Cathedral of Santa Maria Assunta (also known as Pienza’s Duomo), represents a rare and delicate balance of both Gothic and Renaissance forms. Inside, the Marian theme, dear to the Pontiff, is expressed through artworks by some of the best names from the Sienese School.

The entire complex, standing on the location of the original pieve or Romanesque Abbey Church of Santa Maria, was conceived as making up part of a perfect scenographic effect in the city’s main piazza.

The Duomo’s interior is divided into three naves, with two lines of pilasters featuring half columns and decorated capitals. The apse, then, is divided into three chapels, the principal of which hosts the choir. The other two, rather, are formed by the arms of the cross vault, and each contain a large window. In the church’s left, lateral nave, inside a niche, is a rather singular (electric) organ made of reed, from the 1970s.

Palazzo Piccolomini, also called the Pontifical Palace or Palazzo del Pontificio, is attributed to Bernardo Rossellino, and inspired by Leon Battista Alberti’s Palazzo Rucellai in Florence. On a square plan and built with rusticated or sandstone ashlar stone, the structure spreads out over three floors. Its windows, with lesene (or vertical, low-relief pillars) and columns that by turns intersperse with the family crest in stone and apostolic emblems in gold and silver. The building’s interior reveals a small, rectangular courtyard, with loggia and garden, of course constructed according to the precepts of the Renaissance.