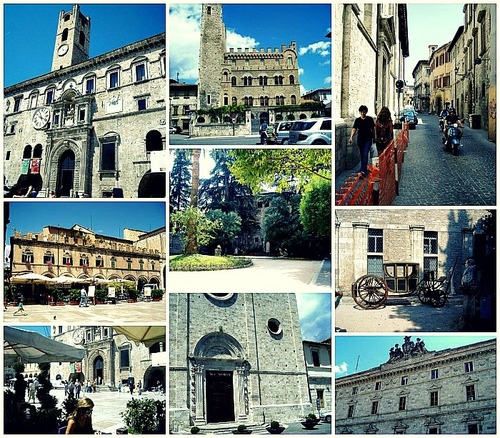 I have visited Ascoli Piceno twice. The first time was on the road trip with Liane after we left the school in Castelraimondo.

Ascoli Piceno is a town and a commune in Le Marche region of Italy.

The central historical part of the city is built in marble called travertine, a grey-hued stone extracted from the surrounding mountains.

Ascoli has good rail connections to the Adriatic coast and the city of San Benedetto del Tronto, by highway to Porto d’Ascoli and by the Italian National Road 4 Salaria to Rome.

Everything inside the fortified town can be reached on foot. There is a tourist office on the ground floor of the Palazzo dei capitani in the Piazza del Popolo where they will explain to you where to walk to and what to see.

One year later, while staying in the house in Pievebovigliana, our friends Malcolm and Maureen took us to Caldorola, Sarnano, Amondola and then Ascoli Piceno. We arrived in time for an hour or so of exploring and then lunch at the Café Vittoria where I enjoyed the most superb salmon pasta.

Then for some more exploring till early evening before driving back to Sarnano.

Ascoli Piceno is a small town, well worth seeing as it is lovely! We had a great time here, we enjoyed the magic of the place and the architecture is amazing. There are many chic restaurants and cafes.